Brokeback to the Future trailer parody

The intention of editing is to combine different points of view on a scene by placing shots in sequence, thus advancing a story or idea.

Early film did not use editing, but instead recorded an event from a single point of view with an unmoving camera. These early “actualities” such as the Lumiere Brothers’ “Arrivee a la Gare” (arrival at the train station) simply placed the camera in one location and rolled film until the event concluded. This replicated the function of the proscenium stage, where events unfolded in a single time and place. American innovators such as Edwin S. Porter IMDB began creating the grammar of film as we know it today in the early part of the last century, moving the camera from one location to another, changing its distance from the subject, and “cutting” these shots together to form a cohesive sequence meant to advance the action without calling attention to the mechanics of the filming or editing process.

At the same time, Russian innovator Sergei Eisenstein IMDB was experimenting with other means of expression in film. He believed that the purpose of editing was not try to create a cohesive spatial or linear narrative, but rather to juxtapose images of varying subject, length, scale, and camera position to convey a feeling or idea. His approach has come to be known as “montage”.

There two distinct (and sometimes intermingled) styles of editing are sometimes called: Continuity and Complexity.

Continuity (or Invisible) editing is generally used in conventional narrative films. It uses established patterns of shots such as

These are used tell a story and advance action without acknowledging the movement from one camera point of view to another.

Elaborate and sophisticated conventions have emerged which are constantly in the process of modification, but which are based on these early ideas of establishing narrative space.

The notion of Montage is the idea of creating meaning through the collision of images.

Film and animation directors compose within a shot, but also between shots (“shot to shot) using editing. The most important simple rule for editing sound and image is:

ALWAYS have a motivation to edit or “cut” to another shot!

The motivation has to come from within the elements of the shot: the sounds, the image, the action, the dialog. You don’t cut because you want to, you cut because the idea or action will be advanced/improved/forwarded by the cut. Motivation should come from within the frame and/or the story, and be something that the audience would on some subconscious level support as rational and reasonable within that story universe.

As you cut from shot to shot, watch where your eye is within the frame in shot A and where it will focus first in the following shot B. You only want to make the eye hop around the frame from shot to shot when you are trying create a sense of urgency, chaos or disorder. Watch any television commercial with sexy bodies in it. I guarantee they will exit a shot where your eye is on some attractive part of the body to a shot where the logo, product or brandname is in the same visual coordinates at the beginning of the next shot. Watch any movie and just play the game watching where your eye lands, because of contrast or movement, from shot to shot, and you will see a pattern that the editor has orchestrated the movement of your eye from shot to shot in a highly intentional way. Can you discern the intention?

Identify and name all shots. Use simple football diagram storyboard (boxes, with x’s and o’s) shot to shot to indicate what motivated the shot: Action/Movement, Sound, Dialog. 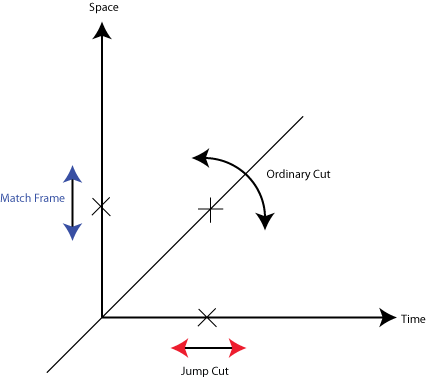 Make a list of sound effects need for your story

Create a test sound collage similar to the tree project using the sound effects that you found. Post the Sound collage on your site.