Difference between revisions of "OOP Class6"

UML
Unified Modeling Language.
"A modeling language is a language whose vocabulary and rules focus on the conceptual and physical representation of a system"

The name of the Class should go inside of a box

You can also specify Attribute types with a :

Default vlaues are specified with =

Operator return type are also specifed with a :. Opertor parameter signatures are specified by ( name : Type ) 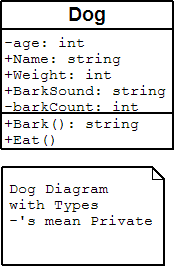 We are going to pair off to do our next assignment. Many of the paired programming principles come from XP (http://www.extremeprogramming.org/ Extreeme Progamming)

Pairs are good because

Fail - If you are having trouble succeeding fail.

If you do decide to dive and conqure the problem please remember that integration process is unpredictable and can be quite difficult. Try to integrate your code often. Try posting up your code and emailing or plan on meeting several times.

When topair programmers are together one you should sit a one computer (yeah that right two of you at one computer) and one should type while the other watches and reflects. Feel free to slide the keyboard back and forth when someone get tired, stuck or has a new idea.

I would like you and your paired partner to create and demonstate classes in c# from the diagram below.